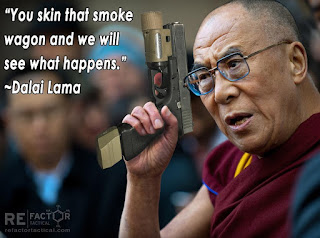 Kid gets in trouble and dad owns firearms.  Unless dad satisfies the bureaucrats regarding his firearms, State takes kid out of the home.

The only good Leftist...

Prosecutor Kimberly Wyatt with King County’s Regional Domestic Violence Firearms Unit – the only specialized unit in the state that helps other police agencies statewide and family members with ERPOs – believes the orders should apply to juveniles.

“We’ve had that issue come up multiple times, and we’ve been asked around the state by other law enforcement agencies that are struggling with the same issue. To date, I don’t know of any that have been filed yet against juveniles, but we have one particular case where we are making that recommendation to law enforcement right now,” Wyatt said.

In this case, they are working with a school resource officer at a school where a student under 18 is facing charges for a crime, requiring he not have access to weapons to determine if they need an Extreme Risk Protection Order.

“We would file the ERPO against the juvenile because the father has access to firearms in the home, and the father is not being cooperative with law enforcement to confirm that the firearms are out of the home,” Wyatt said.

She said police had tried several times to confirm with the father where the guns are located, but he refuses to comply.

Wyatt said using the ERPO would not be about taking away the father’s firearms rights.

“We’re trying to say, ‘Dad lawfully can possess those guns,’ and we would hope that most parents have given law enforcement reassurances where the firearms are. But in this particular case, the father has declined to give any of those reassurances. So we would say that the juvenile could not be in that home with access to firearms. If dad wants to keep the firearms in the home and not share the information, you know that puts him in a difficult position,” Wyatt said.