H.R. 7115 reads: “To prohibit the sale, acquisition, distribution in commerce, or import into the United States of certain firearm receiver castings or blanks, assault weapon parts kits, and machinegun parts kits and the marketing or advertising of such castings or blanks and kits on any medium of electronic communications, to require homemade firearms to have serial numbers, and for other purposes.”

Ammoland has the story >>

III Arms has the facts: This is what Leftists and Commies do.  Don't sweat this particular legislation - it simply isn't going to happen.

That said, make no mistake, the tyrants among us will never stop trying to disarm us and impose their will upon us.  States are now actively confiscating firearms under 'Red Flag' laws. The Leftists will never stop until we make them stop.

It is imperative that American Patriots have access to tools of the Militiaman that have no serial numbers, have never been part of a paper trail, have never been listed in any database - and are legal.

Buy an 80% build kit - at least 1 handgun and one AR for each member of your family and your Liberty Response Team.

Never get on the bus or train. 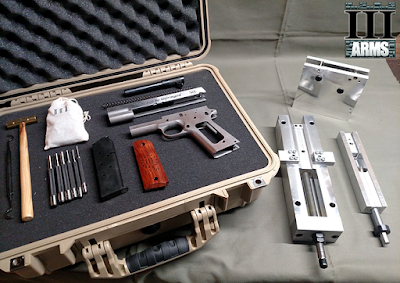